SOME HISTORY: Robert Rauschenberg and Social and Environmental Activism (2 of 2)

Click here to read the first installment of Julie Martin‘s essay looking at the roots of Robert Rauschenberg’s social and environmental activism, and those ties with the ongoing Marfa Dialogues/New York program sponsored in part by the Rauschenberg Foundation.

E.A.T. board member Theodore Kheel had long been an advocate for public transportation, and as early as 1965 was proposing that subways be free in New York City. One of his affinities with Rauschenberg  and Klüver was their shared belief in the power of art to communicate new societal ideas and the importance of artists speaking out on issues. He began a decades-long collaboration with E.A.T. and Rauschenberg to provide ways for the artist to “speak out” on local and global environmental issues.

In 1970 Rauschenberg had created his first poster dealing with the environment. Inspired perhaps by the Vietnam War protestor teach-ins, Senator Gaylord Nelson from Wisconsin called for an environmental teach-in, which he called Earth Day, to be held on April 22, 1970. The response was huge, over 20 million people participated that year, and Earth Day is now an annual event celebrated by more than  500 million people and 175 national governments. Rauschenberg created the first Earth Day poster, published in an edition of 300 signed and 10,000 unsigned copies to support the American Environment Foundation. 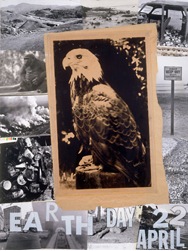 Lithograph and chine collé on paper, 521/2 x 371/2 inches
From an edition of 50 published by Gemini G.E.L. and The American Environment Foundation.
Art © Robert Rauschenberg and Gemini G.E.L./ Licensed by VAGA, New York, NY

Two years later, Kheel asked E.A.T. to coordinate a project in which Rauschenberg and seven more artists, including Jared Bark, Romare Bearden,  Christo, Tom Gormley, Alan Sonfist, and  Margery Strider, were asked to create prints commenting on the importance of public transportation versus the use of private cars and the unfettered growth of highways.

The works were printed in the magazine LithOpinion,  published by the Local One Amalgamated Lithographers of America union, to accompany articles by Kheel, Senator Edward Kennedy and writer Ben Kelley in a section called “Our National Transportation Mess.” Ben Kelly detailed the hold the “Highway Lobby” had on spending in the 1956 Federal Highway Trust Fund, which used some portion of the tax on gasoline to build highways throughout the country. Seen as necessary in the 1950s, by 1972 the program was so “successful” that, as Kheel noted in a 1992 “pledge for the environment” talk at the UN, “in less than two decades we had built enough highways to travel from here to the moon.” But along the way this highway system decimated the use of railroads, led to growth of suburbs that emptied cities of their middle classes,  not to mention, “ traffic congestion, air pollution, ozone layer depletion, and the rapid deterioration of  mass transit.”  Senator Edward Kennedy outlined his attempt to pass legislation that use portions of the Highway Trust fund to fund mass transit initiatives, and Kheel wrote of his fight to have the Port Authority use funds for an effective transportation system in the New York City area. 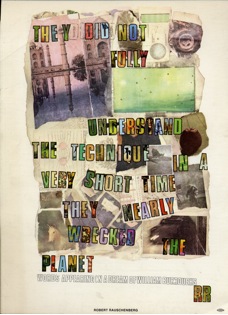 Rauschenberg’s work  featured the words of William Burroughs and is discussed in an excellent article, “Rauschenberg’s Environmental Activism,”  by Robert Mattison in a book published on the occasion of an exhibition focusing on Rauschenberg’s works dealing with a variety of environmental subjects at the Jacobson Howard Gallery that opened a month before  his death. Of Burrough’s Dream, Mattison writes:

The artist had recently visited Beat writer William Burroughs and discussed the project with him. Burroughs told Rauschenberg of a dream in which the words “they did not fully understand the technique / in a very short time they nearly wrecked the planet” had appeared to him. For Rauschenberg, Burroughs’ dream captured the difference between good intentions and knowledgeable execution. … While Rauschenberg’s collage method is highlighted by the hand-torn fragments, they were all very carefully chosen. In addition, each letter of Burroughs’ phrase, featuring a different color and  visual pattern, was laboriously hand-cut and attached to the original work. The final piece is handmade using a great deal of care and technique. By analogy, the sure technique of  Burroughs’ Dream embodies the notion that expertise will be required to solve our environmental dilemma. (Robert Mattison, Rauschenberg’s Environmental Activism,” Your Turn Last Turn:  Robert Rauschenberg and the Environmental Crisis, New York: Jacobson Howard Gallery, 2008, p. 11-12.)

Coincidentally this work was made in 1972, the year of the UN Conference on the Human Environment  in Stockholm June  1972, which was the first international gathering that paid attention  to  the global human impact on the environment, and attempted to forge a common approach to address the challenge of preserving and enhancing the human environment.

Twenty years later in 1992 when plans were being made for the United Nations Conference on Environment and Development in Rio de Janeiro — now known as the Earth Summit — the Secretary General of  the conference Maurice Strong, who had headed the 1972  UN conference in Stockholm, turned to Ted Kheel to gain support and publicize its message in the general population. Kheel drafted what was called the Earth Pledge:

“I pledge to make the earth a secure and hospitable home for  present and future generations.”

He set about getting signatures for this Earth Pledge as a sign of support for the Earth Summit, with the idea that “the Pledge can give everyone in the  world a chance to participate in the Conference, an opportunity to emphasize their concern about its success … the Pledge underscores that everyone is part of the problem and indispensable to the solution … it affirms the  universality of the challenges we face… It also asks each one of us to do what we can in our daily lives to help, and there is much we can do.

Then as Kheel himself tells

Bob Rauschenberg’s comment on the Highway Trust Fund was right on target. It assessed neither blame nor praise … his comment is equally applicable to most environmental challenges… When I was asked to promote the Pledge I turned once mere to Bob for help … and he has created a remarkable work of art commemorating the conference and promoting the Pledge.”

These statements were made at a ceremony at the UN to launch the Earth Pledge effort and introduce Rauschenberg’s work: 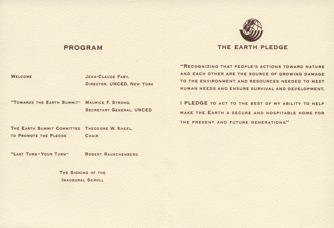 Rauschenberg had created a painting, Last Turn Your Turn, which incorporated the words of the pledge and again expressed up each individual’s responsibility for the future of the environment. The Robert Rauschenberg Foundation donated a limited edition of prints of the image to support the effort of the Earth Summit Pledge Committee.

Kheel also enlisted the support of Transportation Displays Incorporated (TDI),  one of the largest outdoor advertising companies n the country, who donated space on the exterior and interior of busses in 30 cities across the United States January to March 1992. Rauschenberg created the work Ozone to be placed in those public spaces

Kheel and Rauschenberg with New York City Bus in front of the UN at unveiling of Rauschenberg’s, Ozone, on the bus, 1992.
UN Photo # 282327

Rauschenberg attended the Earth Summit in Rio, where Last Turn Your Turn, was shown at Riocentro and became an official image of the conference. 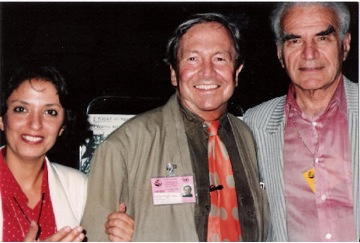 Rauschenberg at the Rio Earth Summit in Rio in June  1992 with Ashli Varma and Bernard Kalb. Varma was the editor of the style=”font-size: small;”>Earth Summit Times, a newspaper published by Kheel for the Earth Summit. (Photo: Ashli Varma)

While the results were not as far reaching as world environmentalists would wanted, the delegates of 178 nations in attendance at the Earth Summit unanimously endorsed Agenda 21, an historic document based on the concept of sustainable development, defined as “development meeting the needs of the present without compromising the ability of future generations to meet their own needs.”

… the Rio Declaration, which reaffirms and builds upon the Stockholm Declaration, has nevertheless proved to be a major environmental legal landmark.

In resolution 47/190 of 22 December 1992 the General Assembly endorsed the Rio Declaration and urged that necessary action be taken to provide effective follow-up. Since then, the Declaration, whose application at national, regional and international levels has been the subject of a specific, detailed review at the General Assembly’s special session on Rio+5 in 1997, has served as a basic normative framework at subsequent global environmental gatherings, namely the World Summit on Sustainable Development in Johannesburg in 2002 and “Rio+20”, the United Nations Conference on Sustainable Development in 2012.

This brings us to  2012 the year of the most recent Earth Summit, 2012, which paid tribute to the original Rio Summit by calling itself Rio+20. It was held the same year that planning started for Marfa Dialogues/New York and the meeting in the Chapel, where the ideas and words of Rauschenberg still inspire the effort:  “I try to use my art to communicate that you, yourself, must take responsibility for life on earth.” 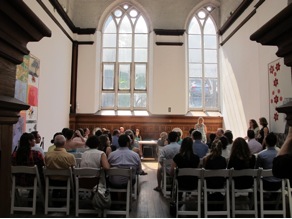 This entry was posted in News and tagged E.A.T., Earth Day, Julie Martin, Marfa Dialogues, MD/NY, Robert Rauschenberg, Robert Rauschenberg Foundation, Theodore Kheel. Bookmark the permalink. Follow any comments here with the RSS feed for this post. Comments are closed, but you can leave a trackback: Trackback URL.